The History of Engagement and Wedding Ring Set

The History of Engagement and Wedding Ring Set 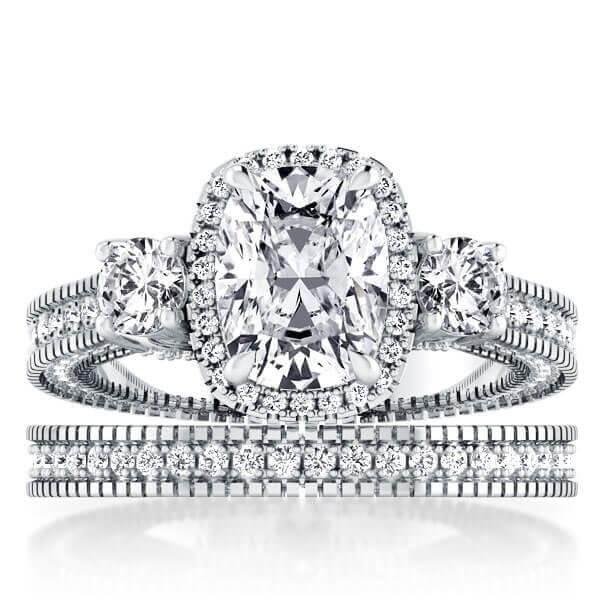 Engagement and wedding rings set have a long and storied history, dating back to the days of Egypt and reflecting the changing styles of the times since. Here’s everything you need to know about the history of engagement rings and the popular styles that marked certain decades.

Long before the custom of wearing wedding rings as a sign of marital commitment, the Egyptian pharaohs deemed the circle a symbol of eternity. The Romans recognized this shape, with no beginning and no end, to be the perfect representation to honor the marriage contract.

Wearing a wedding ring on the fourth finger of the left hand is also traced to the Egyptians. They believed in the vein of love, or the vena amoris, running from the top of the fourth finger to the heart. Egyptian wedding rings were made of hemp. Although the sentiment was there, the radiance and durability factors were nonexistent. Aside from the constant wear of the hemp, it lacked the sparkle feature of the rings to come.

The Romans began using iron for their matrimony rings, and then later used gold. The concept of adding diamonds to wedding bands was introduced by the Italians. Ever the romantics, the Italians believed diamonds were the product of plain stones forged by the flames and heat of love.

Wedding bands for grooms, used during a dual ring ceremony, were started by the Greek Orthodox Church in the 1300s. At the beginning of World War II, the dual ring custom became popular in the United States. Dual ring ceremonies are the majority of the weddings today.

In 1477, Archduke Maximillian of Austria started the tradition of giving a diamond ring as a sign of commitment when proposing engagement. Mary of Burgundy received a gold ring with small diamonds forming the letter M from the archduke.

Shakespeare referred to engagement and wedding rings in his plays written in the late 1500s. In the 1600s and 1700s, European lovers exchanged silver rings with a message engraved inside. The silver engagement ring would then be exchanged for a gold ring at the wedding.

In the late 1800s, a large deposit of diamonds was found in South Africa. From this point on, diamonds became the most common feature for engagement rings. Shortly thereafter, Tiffany & Co. created the Tiffany Setting by raising the diamond above the band, making it the centerpiece of the ring.

Engagement and Wedding Ring Styles Change by the Decade
Years later, engagement and wedding rings are still the classic and most popular tradition associated with engagement and marriage. Although the tradition has stood the test of time, the styles of the rings has continued to change over the years.

1900s: The early 1900s was a time of expansion and affluence, thanks to the industrial revolution. Engagement and wedding rings reflected the newfound wealth, with ornate diamond rings in platinum.

1920s-30s-ArtDeco1920s and 1930s: Art Deco was the theme of the 1920s and 1930s. Styles were more geometric and accented with rubies and sapphires in a move toward something more modern than the more feminine styles of the prior decade. 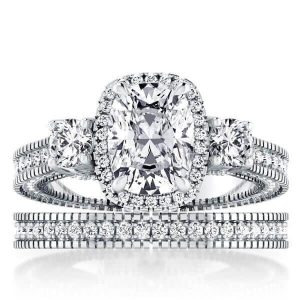 1920s and 1930s: Art Deco was the theme of the 1920s and 1930s. Styles were more geometric and accented with rubies and sapphires in a move toward something more modern than the more feminine styles of the prior decade.

1940s: World War II brought many hardships, making platinum, the previous metal of choice for engagement rings, scarce. Even with financial difficulties, engagement ring designs were bold in size. Instead of the choice gemstone of a diamond, many couples used simulated sapphires and rubies for their engagement rings. 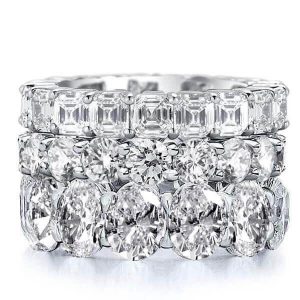 1950s: A popular movie star of the times, Audrey Hepburn, chose stackable diamond band rings. Each was in a different color of gold, and she could choose white gold, yellow gold or rose gold to match her outfit. This multicolor stackable ring design was popular during this decade.

1960s: Two popular women in the 1960s changed engagement ring styles. Elizabeth Taylor made headlines in 1963 with a 33-carat Asscher-cut diamond ring from Richard Burton. This was the biggest headline about a celebrity engagement since John F. Kennedy presented Jacqueline with a stunning emerald and diamond ring several years prior. 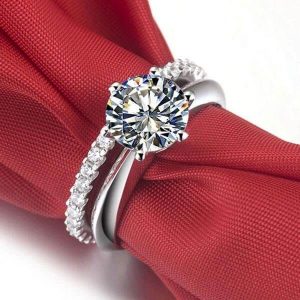 1970s: This generation of couples wanted something new and different, and the princess and radiant cuts were choice picks. The square shapes became and remained a popular selection for brides to be.

1980s: A celebrity in the world of royals, Princess Diana, set off a trend in engagement rings when Prince Charles gave her an oval sapphire surrounded by The sapphire and diamond setting was replicated and sold for years.

1990s and 2010s: During these two decades, no one style ruled. Year by year, new creations would rise and fall, but the most chosen engagement ring was the simple solitaire diamond ring. The cut, color, clarity and carat became key factors to consider, since the single stone was the focal point of the ring.

Today: The trend for today is all about unique custom designs that reflect the personal style of the couple. Couples are seeking an intimate journey designing and creating an engagement ring and wedding bands that are theirs alone. The Wedding Ring Shop has everything today’s couples are looking for, and even offers clients the unique opportunity to work with award-winning designers like Noam Carver to create their own custom wedding bands!